COLUMBUS, Ohio, Feb. 23, 2021 (SEND2PRESS NEWSWIRE) — For most the American Dream begins with an idea. For Fortin Ironworks, that idea began with a truck, a small shed and a man with a passion for welding. Today, 75 years later, it’s reflecting on that humble beginning.

The founders, Joe and Josephine Fortin, a 22-year-old Italian American couple, were initially introduced as friendly pen pals during World War II when Joe was stationed in Iran for the U.S. Army. After two years of correspondence, they found more than friendship. Without ever meeting, they engaged, somehow knowing that their love could grow to last a lifetime.

Shortly after their August wedding in 1945, World War II ended. Joe was honorably discharged and the couple’s long-distance relationship turned into a love-filled life together.

Jobs were difficult to find after the war, so Joe took matters into his own hands, quite literally. A former welding student of the Columbus Trade School at Fort Hayes in Central Ohio, a welder for the Pennsylvania Railroad and the U.S. Army, Joe was incredibly handy to have around and started doing on-site, portable welding repairs and small metal fabrication jobs. 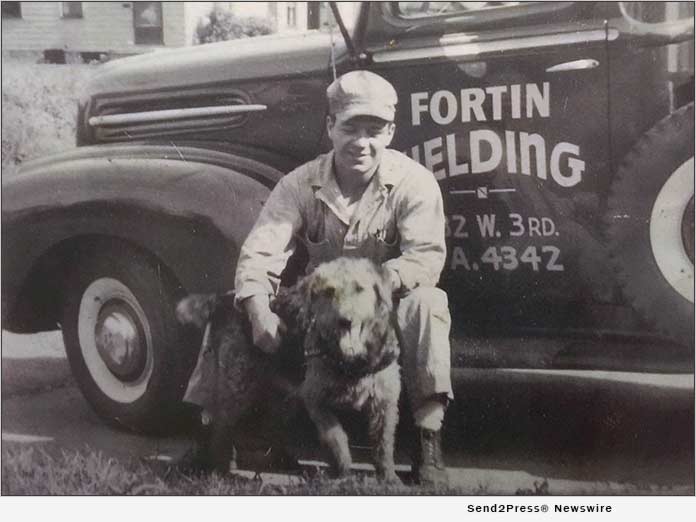 What started out as a small repair shop run out of his truck and a backyard shed, grew into a thriving business. In 1946, this backyard operation officially became Fortin Welding, now known as Fortin Ironworks. Today, it’s a successful, multimillion-dollar company with a modern factory complex on nearly four acres. In fact, the building and its showroom are now local landmarks.

The Fortin Ironworks showroom is a known “destination location” for locals and out of town travelers, alike. Its products can also be found at the Market at Fortin Ironworks, home to the creations of various local artists, eclectic home furnishings and a unique event space available to rent for small gatherings.

Over the years, the business has seen many changes and, most recently, the addition of a high-tech laser machine has allowed it to grow even more and to accommodate unlimited ideas.

Although Joe passed away in 2009, Josephine, now 99, continues to enjoy talking business, gardening, and of course, her many grandchildren who now manage the business. For more information, contact Bob Fortin at: 614-291-4342 ext. 200 or visit: https://www.fortinironworks.com/.

Fortin Ironworks designs, manufactures and offers local installation of most commercial and residential ironwork needs. It’s known for offering the very finest custom metalwork and for tackling all jobs, large or small. It specializes in step rails, fencing, gates, table bases, curtain rods, repairs, and of course, custom metal fabrications. Its staff of 40 is comprised of highly-skilled craftsmen, artisans, estimators, salesmen and installers. The products are manufactured in its 56,000 square-foot facility. The company has multiple accounts with well-known national brands and also ships internationally.